Looking for new ways to engage my students and get them to really embrace our topics, I bought a virtual reality headset and brought it to class. Slides and lectures are fine, I guess (if you don’t care much about student engagement), but there’s nothing like watching your students squeal with delight to help a teacher feel that his lesson unfolds. 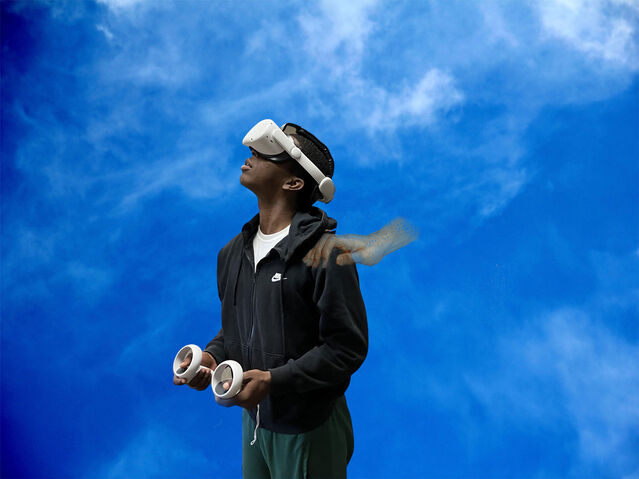 A student of mine experiencing both visual fear and haptic comfort

walk on the plank

I teach psychology, so the incredibly real sense of phobia you get from a 3D plank walking app seems just the ticket. The app I found makes the wearer feel like they’re on top of a skyscraper with their eyes downcast. Better than that, it has options that entice them to step on a board suspended hundreds of feet in the air and descend if they dare. The board creaks with every step, and the feedback is designed to bring them back into the relative safety of an elevator.

It’s funny to see them precariously balanced on an invisible thing, like they’re terrified of falling off the floor of our classroom. You see they to know that the simulated altitude is not real. They to know there is solid ground underneath (and all around). They can even to listen their classmates telling them that it will be fine.

But the facts don’t matter. Their thoughts don’t help. The headset keeps whispering, “Careful! We’re going to fall!” No matter how brave they predict they will be, each student takes turns learning how much stronger that illusion is than those predictions.

Is this new? Not really. Long ago a study was done of infants using nothing more than a glass plate and an illusion of depth (Gibson & Walk, 1960). Oddly enough, more age and more intellect aren’t a big plus when it comes to fear of heights. Contrary to what one might think, we are less afraid at birth than when we grow up (and learn what to fear). We seem to acquire this particular phobia as we acquire the ability to crawl (around 7-9 months). 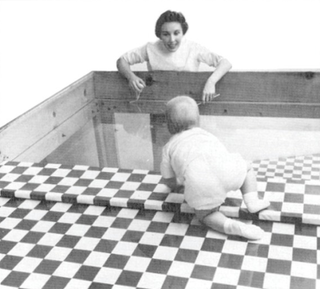 Now, that wouldn’t make for a very good psychological experiment if all I was doing was seeing if they were afraid of heights. No, I wanted to see if we could reduce or dispel that terrifying feeling by using one of their other senses (therapeutic touch, for example). We humans place far too much emphasis on visual processing, and not enough on our sense of touch. We call this haptic processing in psychology.

Nonhuman animals rely on touch even more than we do, especially when they need reassurance (Harlow, 1958). We, on the other hand, have become a kind of haphephobic as a species (fear of being hit) and rely far too much on facts. I thought to myself: Perhaps the touch of an invisible hand on an ankle or a shoulder would be enough to overcome the powerful illusion of depth penetrating their eyes and ears.

Angels on the board

That’s what we did. I asked another student to grab the ankle or shoulder of the student wearing the helmet. The result was instantaneous. Every headset wearer expressed an unseen sense of comfort (despite continuous visual and auditory feedback from the VR headset).

And if they closed their eyes – or peeked under the helmet – the illusion of impending danger vanished and that eerie, comforting phantom hand ruled over their fear of falling. At one point, we even stood on either side of the plank walker and took her by the hand, escorting her to the very edge of the plank. It was as if she was supported by an invisible angel on either side of her.

A lesson in comfort

What did we learn from this? Well, we’ve learned that paying more attention to your sense of touch than your eyes and ears can lessen your fear – it reminds you how safe you really are. So if your feet are telling you “yes, there’s a floor here” but your brain is telling you to ignore your feet, maybe it’s time to listen to your feet more often.

But how does this apply to me, you ask? Well, we watch a lot of news these days, don’t we? An illusion of horrible things happening to someone else bombards our eyes and ears every day, even though you and I are perfectly safe. To attract viewers, the media necessarily try to make their viewers feel that they are in imminent danger. Take, for example, all the stress surrounding the midterm elections and worries about the war in Ukraine (Kammer et al., 2022).

Watching the news every day seems to reinforce viewers’ unease, and even generates a kind of phobia of the future (anticipatory anxiety). To alleviate this, perhaps if we focus on what our physical selves are actually touching (instead of what our mental selves are watching on TV), we can overcome some of this mental anxiety. Maybe, like my students and I did with the VR app, we can overcome the illusion that we’re going to fall off the couch. Look away and suddenly things aren’t as bad as they seem.

My humble advice? Change channels by closing your eyes and focusing on the person next to you. Somewhere in the darkness there is an angel of feeling, reminding you that all is well already.